The British Pound is the official currency of the United Kingdom, British Overseas Territories, and Crown Dependencies. It is the fifth most popular currency in the world in terms of the trading volume. It is also the world’s oldest currency and is sometimes referred to as the “Quid.”  It is still one of the most important currencies in the world today.

The pound was defined as equivalent to one pound of silver as early as 775AD. Following England’s defeat against France in 1694, the newly founded Bank of England began to produce Pound notes, which began to circulate. The Bank of England is responsible for the production of this valuable currency. In the early 18th century, the value of the pound was linked to gold weight rather than silver weight. However, in order to finance its military activities during World War I, the government suspended the gold standard. It temporarily reverted to the gold standard after the war, but the beginning of World War II required the country’s currency to be fixed. The currency fix was broken in the 1970s, and the pound sterling is currently a freely floating currency. 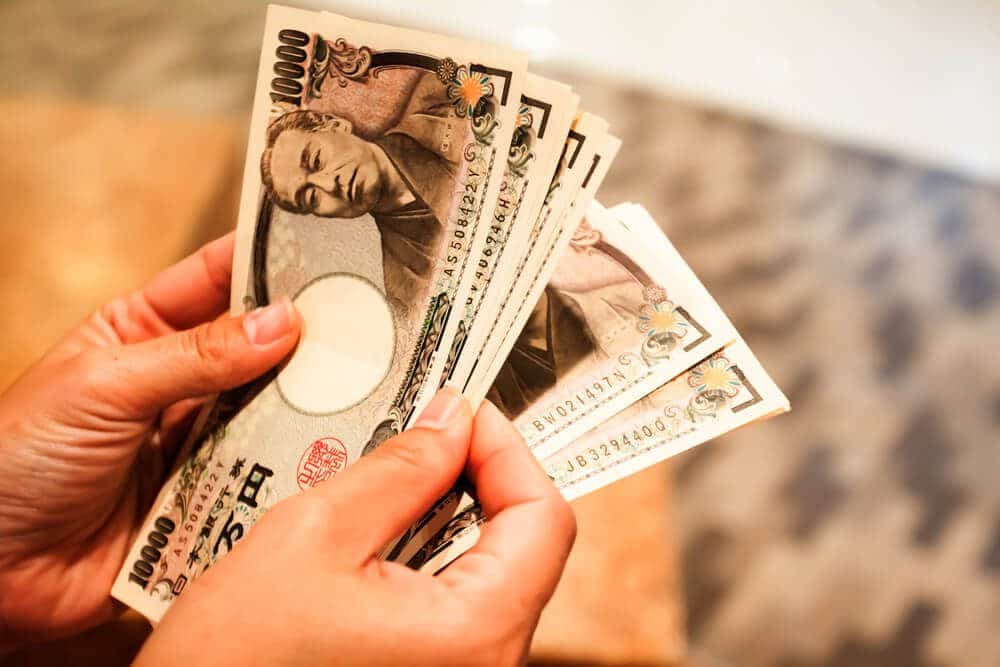 It wasn’t until the Meiji government took over that they finally started producing their own currency. The Bank of Japan is responsible for the issuance of the JPY currency notes. It is also important to mention that JPY is among the cheapest currencies in the region. The Japanese government has tried to maintain these cheap rates in order to keep their export rates low as well in order to beat out the competition. However, this is proving to be rather difficult as the days go by due to the value of Japan’s economy rising quite sharply.

If you tell someone that your favorite currency pair for trading is the GBPJPY, they will undoubtedly think you’re crazy. Most traders, however, stick to the popular options, which are the primary currency pairings that contain the USD. When people become weary of watching the dollar markets all day, they commonly trade in smaller currency pairs. Only a few experts, however, are aware that these smaller currency pairs are where the real rewards are found. There are several reasons why you would choose to trade these minors, especially GBPJPY. Here are some persuasive reasons why you should:

GBPJPY can showcase some of the most volatile market conditions in the forex industry. This is due to a couple of factors. The main one is that it has a huge pip value. This makes it extremely prone to traders looking to capitalize on big markets. The second reason why this pair can very often become volatile is that it has a low trading volume which makes it less liquid. A currency pair that is less liquid is more prone to volatile market conditions because any slight bumps in the economies of either country will massively cause their rates to fluctuate.

The market conditions for GBPJPY are rather simple to forecast. This is because they are mostly affected by changes in their respective areas, which are the United Kingdom and Japan. Any changes occurring anywhere in the globe would have an influence on a pair containing the USD because USD is utilized as the standard currency for transactions worldwide. Similarly, any changes that occur anywhere in the 28 member nations of the European Union would have an influence on a pair that includes the Euro. As a result, keeping track of every place that may have an influence on a currency pair becomes rather demanding. Forex pairs that are just related to a particular area, such as GBPJPY, are significantly easier to forecast since we only need to evaluate their respective economies. 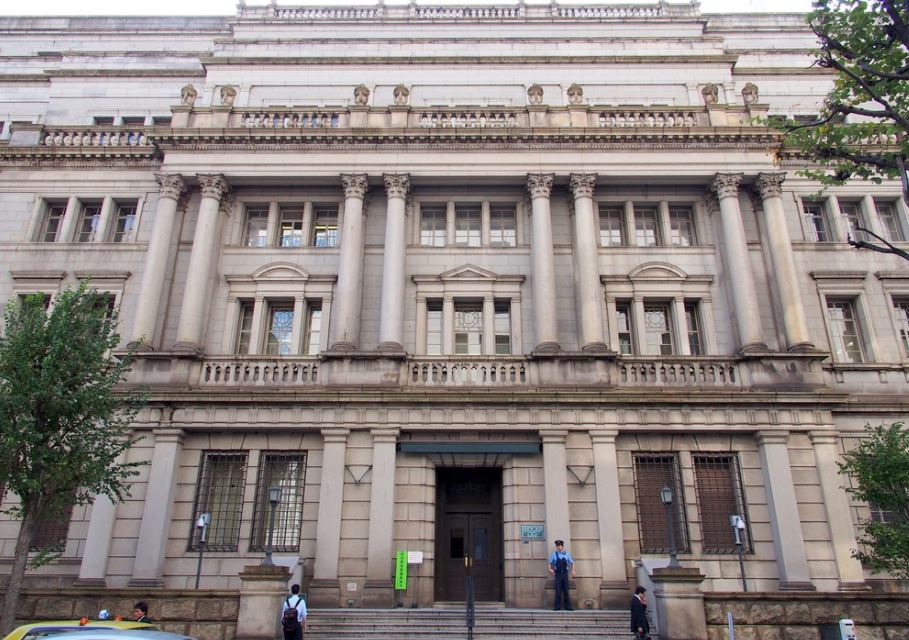 Their reasoning behind these low rates is that they want to keep the value of their currency low so exports are at more competitive prices. Traders are drawn to the GBPJPY currency pair due to its high-interest yields as a result of these interest rates. This pair provides significant yields due to the large difference in interest rates between them. Because of the large payouts, traders frequently utilize a carry trade when trading this currency pair. Carry trade is the practice of selling a currency with a low-interest rate in order to purchase one with a higher interest rate.

Different forex pairs need different trading tactics in order to be traded correctly. This is due to the fact that various pairings, such as the GBPJPY, are affected by various causes, which drive their markets to move in different directions. To properly trade the GBPJPY market, we must first study how it moves. Here are some trading strategies for the GBPJPY currency pair:

Although you can generally trade the GBPJPY currency pair anytime as long as the market is open, there are certain timings that make the market conditions perfectly ideal for this dynamic duo. The perfect time to trade this pair is when both the London and Japan markets are open at the same time. This would be considered between 8 am and 9 am GMT. The reason this timing is so ideal is that both London and Tokyo belong to the countries of GBP and JPY. This would be the UK and Japan respectively. This timing is also ideal because if any changes were to occur in the economic or monetary policies for these individual countries, they would occur within this time zone. And so, this is why it is important to keep in mind trade timings when trading the GBPJPY currency pair.

Scalping is a great strategy for currencies that are prone to volatile market conditions. It is a form of day trading strategy where you only execute trades that you’ll close at the end of the day. Scalpers often open a BUY and SELL trade of a certain currency at the same time, at the same rate. This allows them to capture the market on both sides so they’ll make a profit whichever way the market shifts. The scalping strategy requires no formal training or any knowledge of market analysis. It is therefore a popular strategy among beginners in this industry. Even professionals use this strategy as it is an efficient way of making quick profits. GBPJPY can get quite volatile due to having less liquidity. Volatile market conditions are ideal for scalping as the market is constantly moving up and down so scalpers make a ton of small profits from both ends.

Carry trading involves borrowing a low-interest-rate currency in order to invest in a higher-interest-rate currency. This allows you to lock in a larger interest profit on your investment. When employing the carry trade technique, you must first determine the funding and asset currencies. The funding currency is the currency that is exchanged in the transaction. Typically, this currency has a lower interest rate. The JPY has historically been an appealing funding currency. Going short, i.e. selling the JPY while concurrently purchasing the GBP, is essential for successful GBPJPY carry trading. When this occurs, you will be paid interest depending on the interest rate difference between GBP and JPY as well as the amount of your investment.

As previously said, there are a number of factors that can affect the market movement of forex pairs in the forex industry. These factors differ per currency and are the sole reason for the existence of this market. If every currency pair was affected in the same way, they would all have the same rates at any given time, and the entire market system would fail. As a result, each currency pair is influenced by a number of elements. The elements influencing the GBPJPY are:

Both the Bank of England and the Bank of Japan are majorly responsible for any instability in the GBPJPY marketplace. The BOE and BOJ release monthly reports and statements regarding updates to any policy changes. These reports also display the economic and monetary forecasts for the upcoming short-term. Any positive results from the BOE will have a positive impact on the GBPJPY currency pair. However, any positive results from the BOJ will have an inverse impact on the GBPJPY currency pair.

The Japan Meteorological Agency plays a vital role in the movement of the GBPJPY currency pair. Japan is a country that is very prone to earthquakes and other natural disasters. This is due to their positioning on Earth. Due to this, Japan faces the most number of earthquakes than any other country. And anytime they face an earthquake, their economy drops in value due to several areas requiring repairs and installments. They lose millions of dollars in damages every time they face an earthquake. Due to this reason every time the Japan Meteorological Agency detects an earthquake, JPY drops in value which causes GBPJPY to increase in value. Similarly, if the agency states that there are no upcoming earthquakes anytime soon, JPY increases in value which causes GBPJPY to drop in value.

The United Kingdom is a major exporter of vehicles and car parts. As a result, their economy is heavily reliant on global demand for these products. Any changes in demand for transportation vehicles will have an immediate influence on the value of the pound.

Most common questions asked by the forex traders about GBPJPY:

Who are the best GBPJPY Forex Signal providers?

GBPJPY Analysis GBPJPY is moving in a very strong uptrend. GBPJPY has retested the old broken resistance which act as 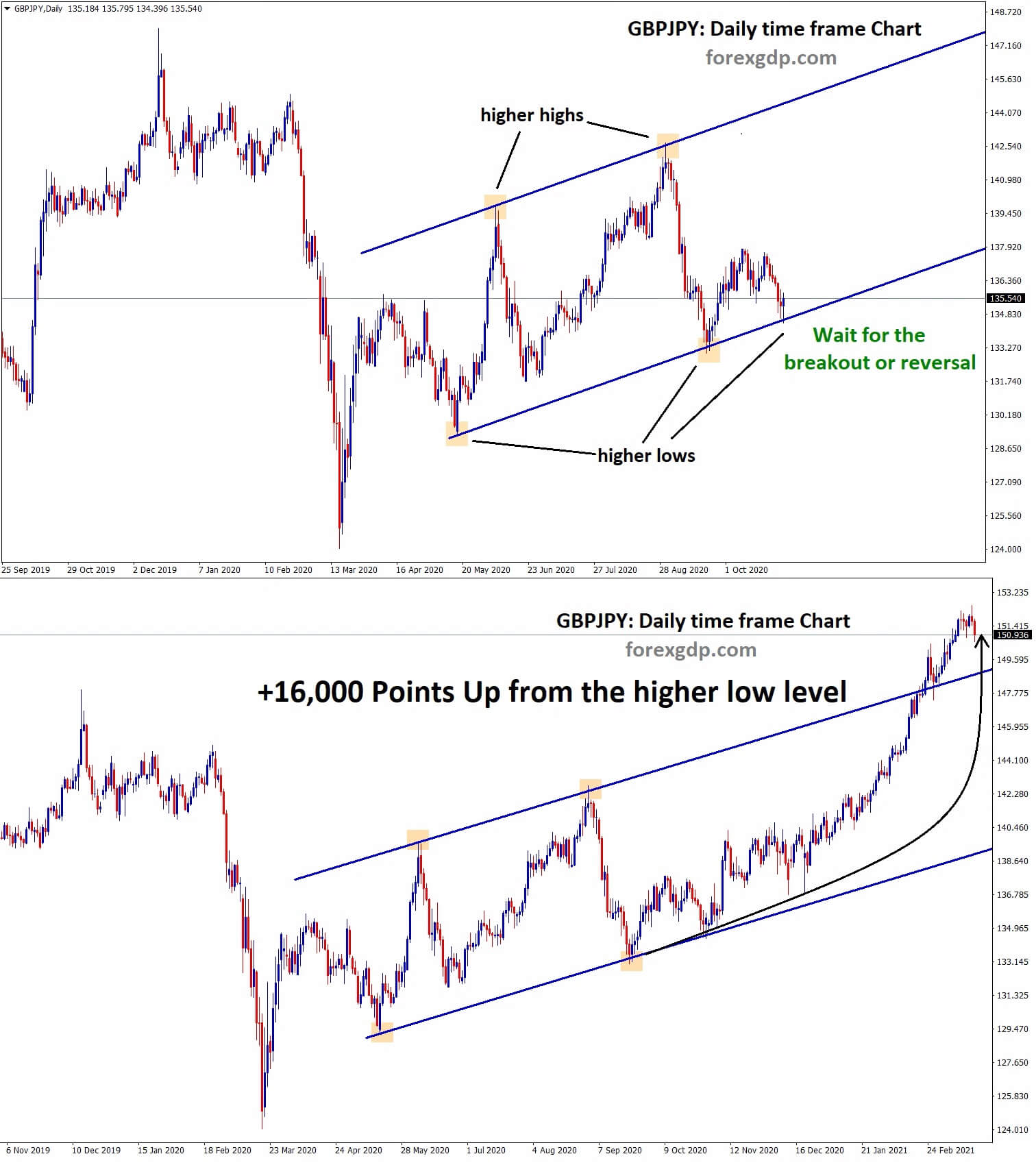 +16,000 Points GBPJPY went up from the higher low level of the Uptrend line (Ascending Channel) 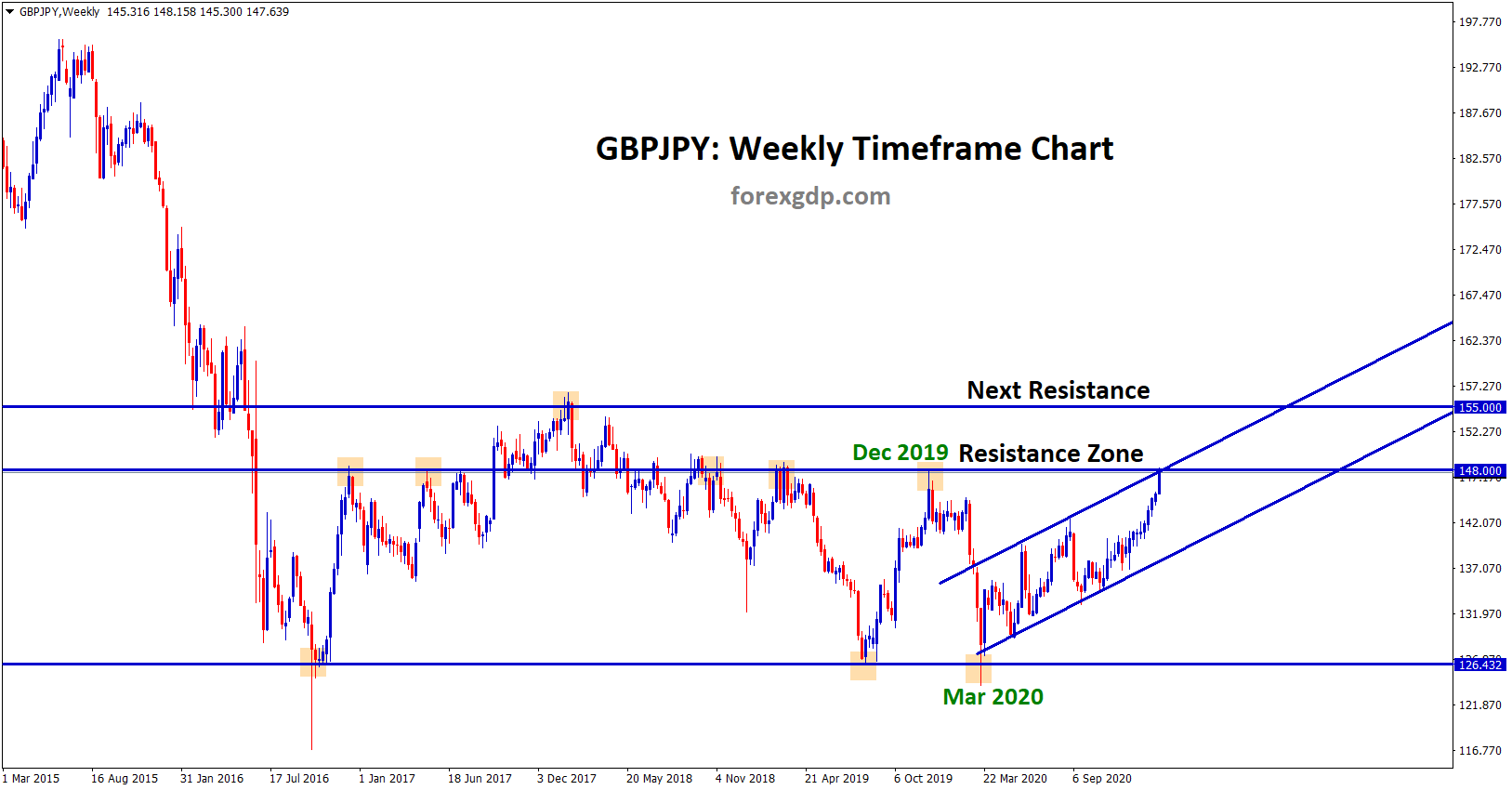 After 14 months, GBJPY has reached the Strong Resistance Zone

GBPJPY Analysis After 14 months, GBJPY has reached a strong resistance zone of 148.00 If the market breaks this resistance, 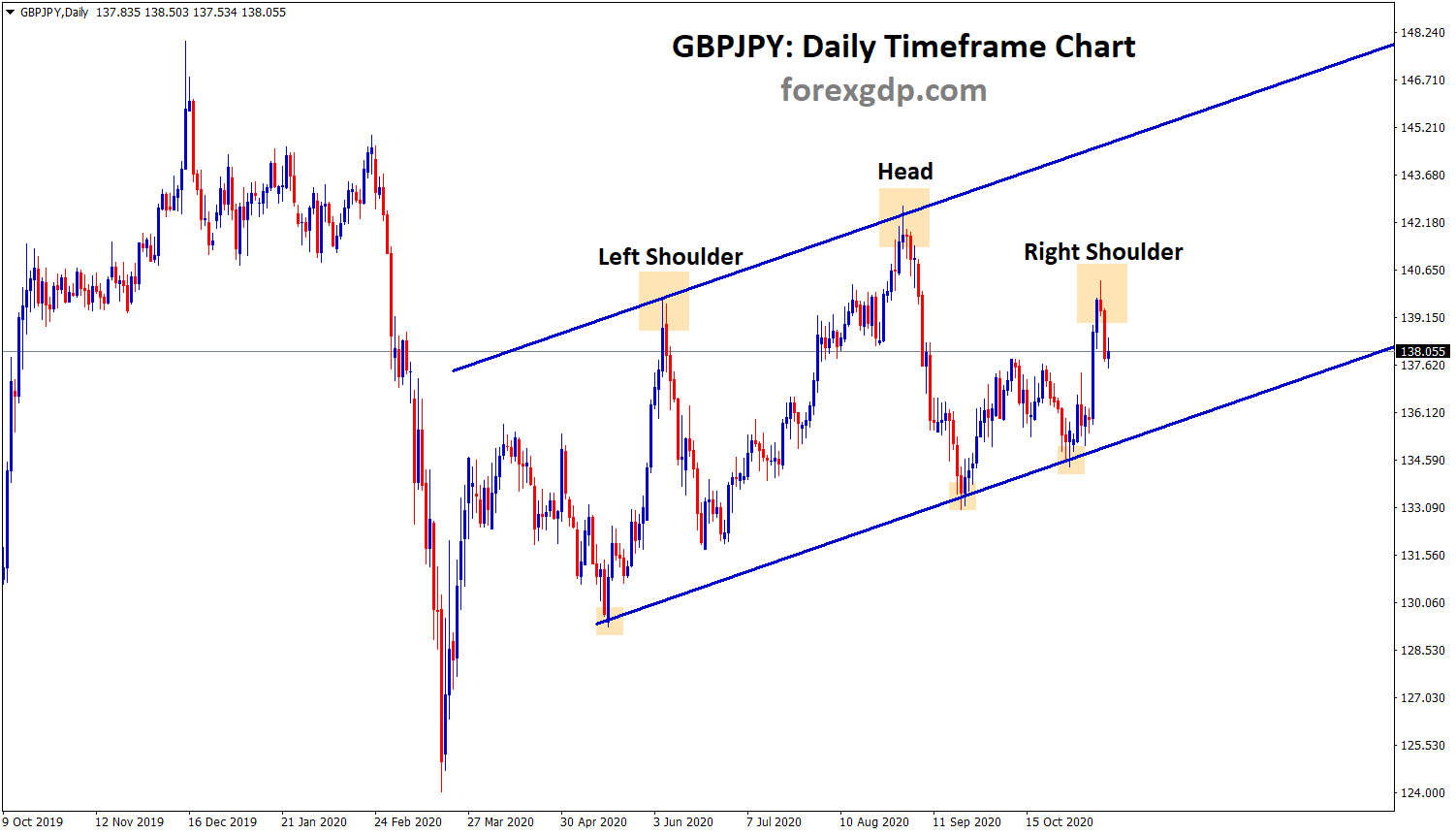 GBPJPY is forming Head and Shoulder in Uptrend?