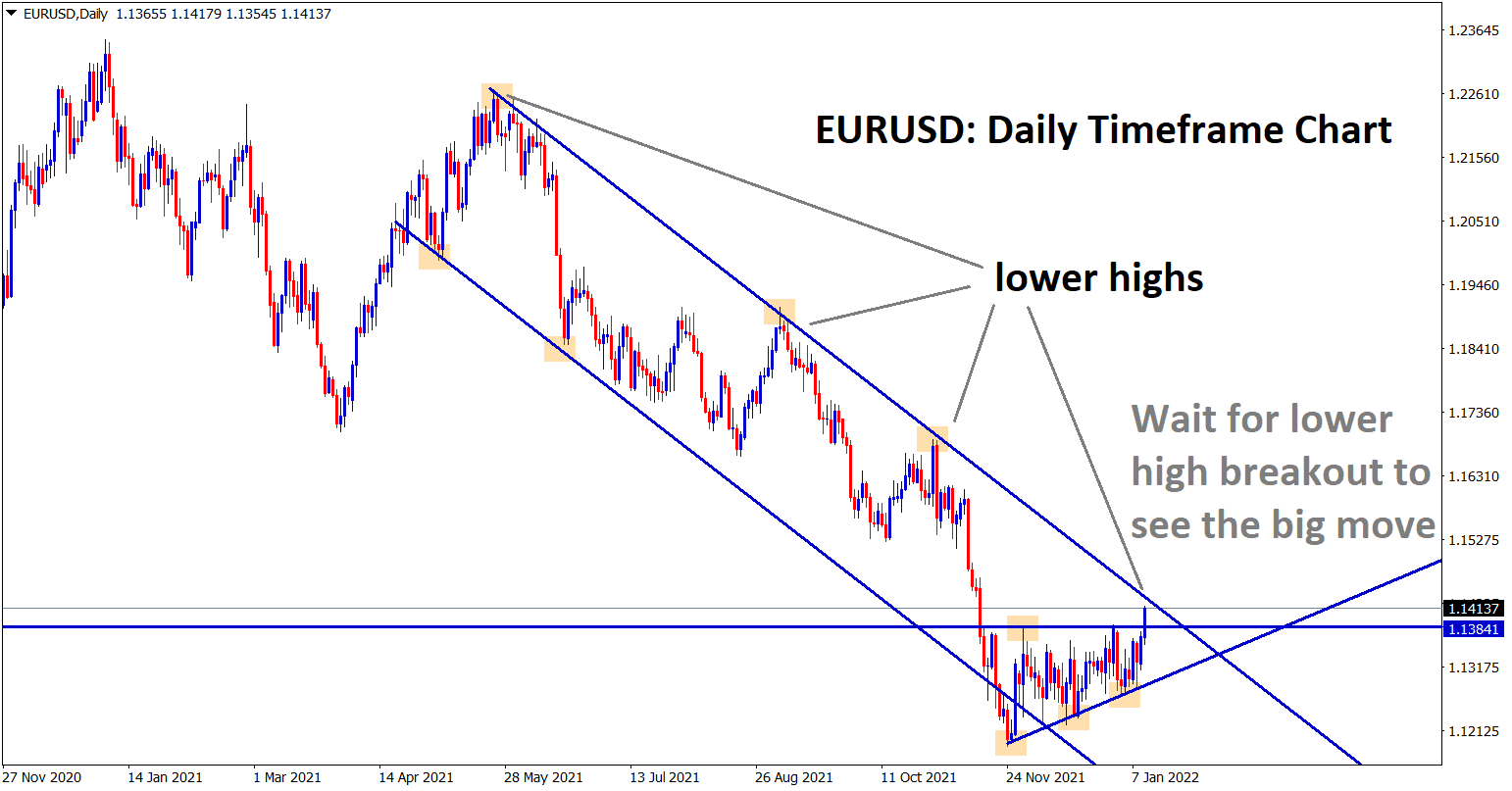 POWELL SPEECH ON TIGHTENING OF MONETARY POLICIES BRINGS THE DOLLAR BACK UP ONCE AGAIN. EURUSD has broken the minor Ascending triangle pattern, now the market is moving towards the lower high area of the descending channel – wait for major channel breakout to see the big move on EURUSD.

THE DOLLAR THIS PAST WEEK

The dollar index this past week has been all over the place. We started off the week strong with the dollar reaching new heights. This came in anticipation of the Feds interest rate hikes. However, not long after, the dollar index started to drop consistently which gave some room for currency pairs such as EUR/USD and GBP/USD to gain some much needed traction after being at support levels for quite some time. This drop in the dollar index was short-lived as the unemployment report came out which showed that there was a slight drop in unemployment levels as compared to the previous year. This also comes in anticipation of the Feds Powell speech which could be crucial in determining the direction of the dollar market in the next couple of months. Read on to know where the dollar stands as of today.

As of last Wednesday, we witnessed the dollar finally start gaining ground again in the early European session. This comes after the Feds Chairman, Jerome Powell, gave his prepared remarks on the monetary policies of the central bank. Analysts predict that the Feds will tighten their policies very soon considering the inflation crisis happening in the country today. Last we saw, the dollar index ended the day close to the 95.675 mark. This comes after they had seen declines to 95.535 in the past few days.

USDJPY is moving in a descending channel range in the hourly timeframe chart. US Dollar decline today after a correction.

Due to the previous fall of the dollar index, currencies such as USDJPY were able to gain back traction and closed the week off at 115.41. This doesn’t seem like much but considering that they’ve been seeing support levels close to 115.04, they’ve definitely made good progress. Similarly, EUR/USD were last seen close to 1.1357 and GBP/USD were seen close to 1.3632. Both were close to their weekly and monthly highs.

On Tuesday, Jerome Powell gave his speech on monetary policies and the U.S. economy. He stated that the U.S. economy was strong enough to deal with higher interest rates in order to cope with inflation.

The top priority of the Feds these days is to combat the ongoing inflation crisis happening everywhere in the country. In order to combat this crisis, they’ll have to raise the interest rates as soon as possible. Analysts predict this raise to occur as early as March. However, these plans are still being debated as they don’t want to risk losing the monetary support being provided by the central bank. In a previous speech, the Atlanta Fed President, Raphael Bostic, stated that the high inflation this week has been strongly impacting a fast decline in the Fed asset holdings.

Later this week, we’re expecting the release of the U.S. consumer inflation data and also the headline CPI report. Analysts predict this report to come close to the 7% mark yearly. They predict this data to reveal that the dollar index will face a period of low market value in the upcoming days.