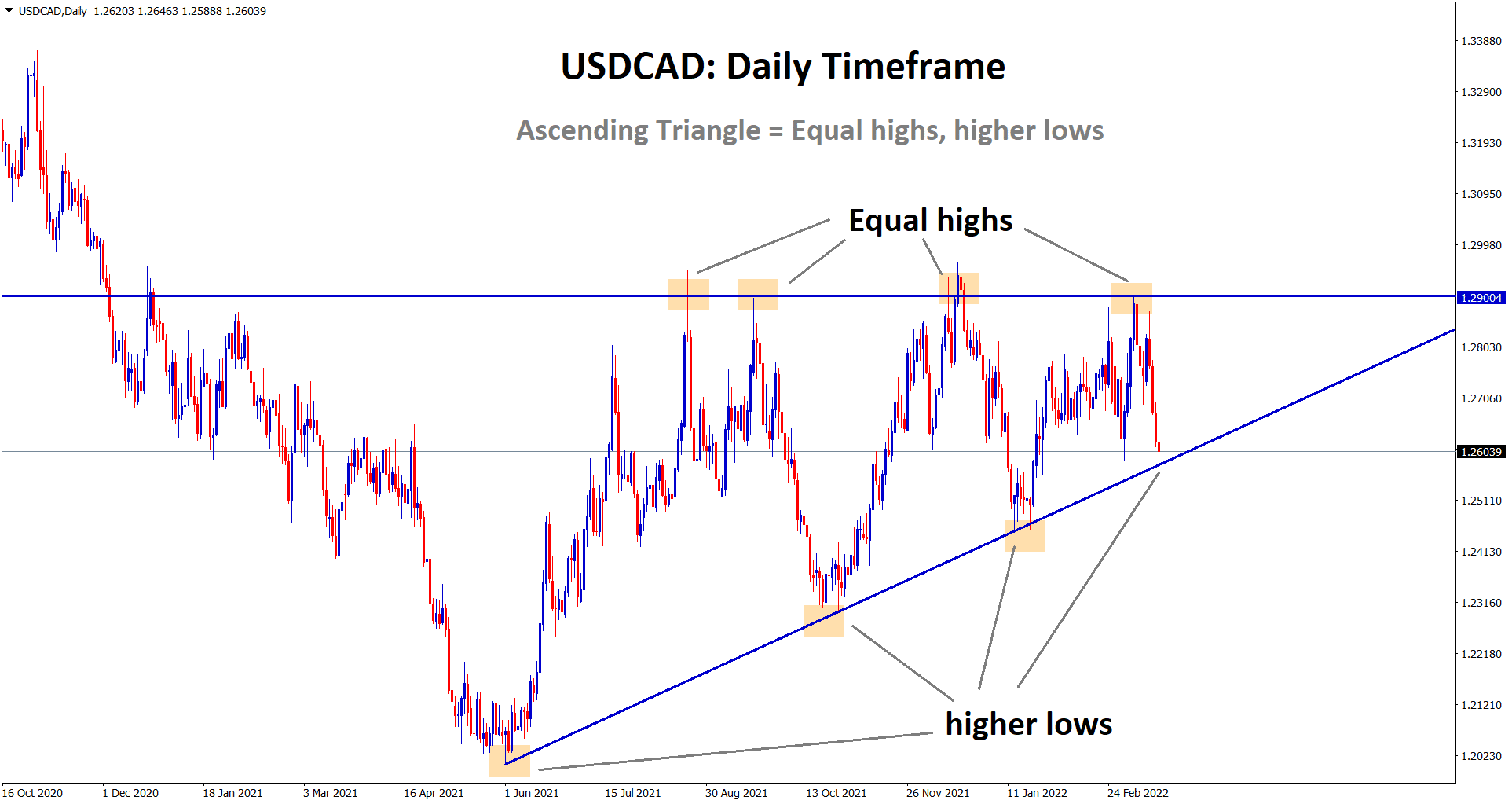 USDCAD price is standing now at the higher low area of the Ascending Triangle. USDCAD started the week off pretty strong as it was following bullish market conditions in anticipation of the upcoming FOMC meeting. Analysts predicted that the interest rates would rise by 0.25% and this proved to be true earlier in the week. However, soon after this was released, USDCAD lost its momentum and started on a downwards trend and hasn’t looked up ever since. USDCAD was at its weekly high just before the FOMC meeting at around the 1.287 mark. It has only been downhill since. USDCAD ended the week off at one of the lowest points for the week at 1.260.

There are a couple of factors contributing to the bearish market conditions being shown by this valuable forex pair. The lack of progress in the war between Ukraine and Russia is definitely one of the main contributing factors in the current market conditions. Russia is more willing these days to end matters diplomatically as it is facing extreme pressure from the international community which are placing sanctions on this superpower. US and China are to hold a conference on this matter which is being highly anticipated by traders globally. Analysts recommend holding any positions with this popular currency until we know more about what was concluded from the conference. Apart from this, the resurgence of several COVID cases in the two countries has definitely constrained borders and made prices become quite unstable.

AUDUSD is breaking the top of the downtrend line in the daily timeframe chart. 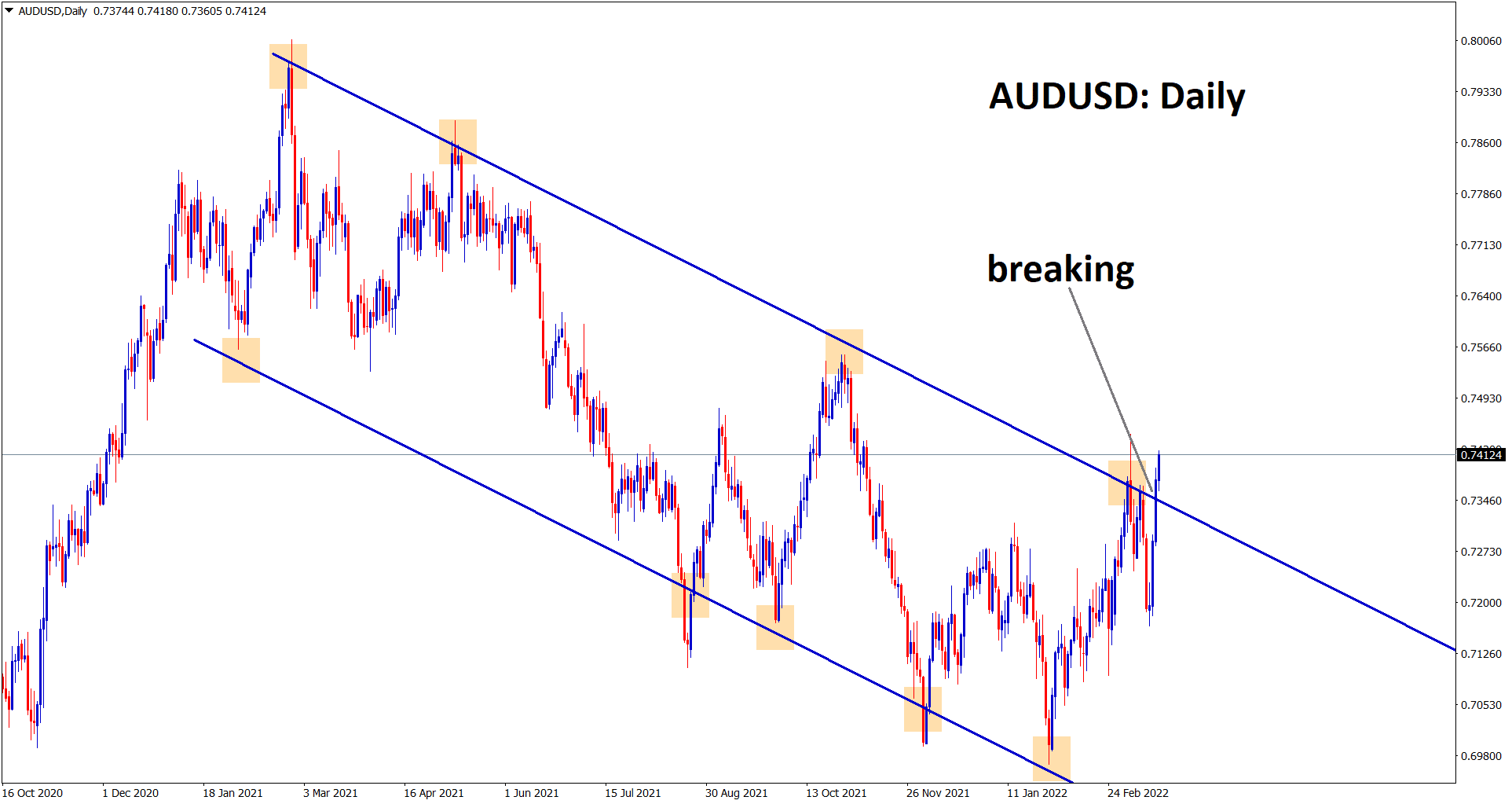 AUDUSD is moving in a strong uptrend in the 4-hour timeframe chart. 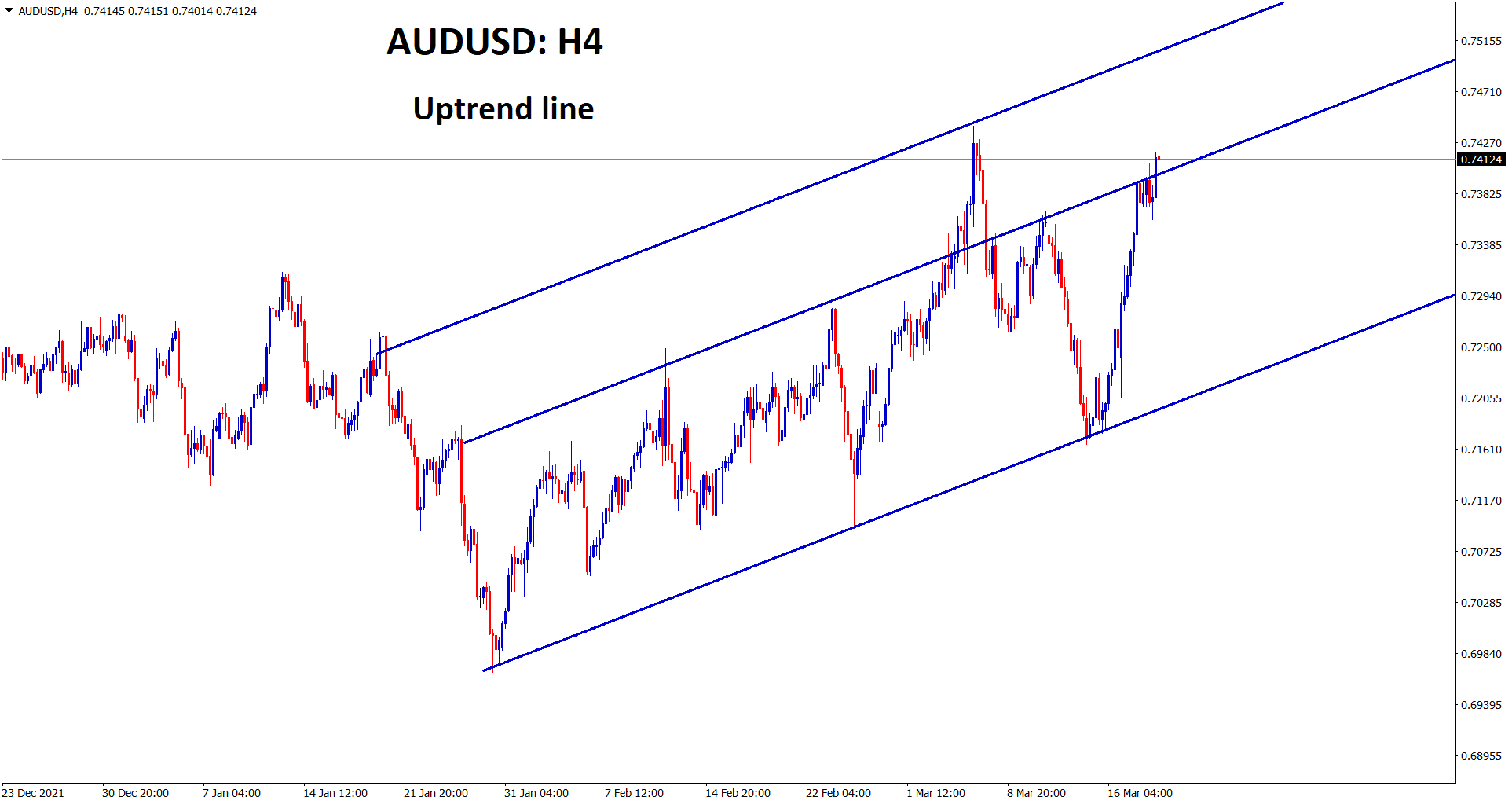 AUDUSD started the week off pretty stable with no large price movements in the market. By Tuesday, we noticed this currency picked up the pace and started showing bullish market conditions. It continued on an upwards trend all till the end of the week. AUDUSD ended the week by crossing its two-week high. This came as a surprise as early on Friday, this forex pair completely dropped to around the 0.736 region. There was little hope for it to recover from this drop. However despite all odds, AUDUSD managed to recover quite quickly. In fact, the same day where it had this extreme low, it managed to recover completely and reach its two-week high at 0.741. This came just in time for when the market closed at the end of the week.

A couple of factors contribute to the current market conditions being faced by AUDUSD. The first is definitely the Australian dollar being optimistic in anticipation of the interest rate hike being released by the Reserve Bank of Australia very soon. Analysts believe the new interest rates will play in favor of the Australian dollar due to hints being given by the domestic jobs report which was released on Thursday. The USD isn’t fighting against the Australian dollar in this situation due to being occupied by matters elsewhere. Both the US President, Joe Biden, and Chinese leader, Xi Jinpingare, to hold a conference regarding the ongoing crisis between Ukraine and Russia. Traders are holding their positions until they know the outcome of this meeting. The Feds remain hawkish in their outlook and are set to increase prices during all 6 of their meetings. This has caused the U.S. dollar to become quite reactive as well.

AUDCAD started the week off in pretty bearish market conditions. It was continuing on a downward trend and went from 0.929 to 0.920, all in a matter of a single day. it regained momentum once again when it shot up to 0.926 but this was short-lived once again as it fell back down to the 0.917 region. Traders were expecting this pair to break support levels and continue descending further downwards though it surprised us all by starting to show bullish market conditions once again. Throughout the week it consistently continued ascending upwards with slight drops in between but nothing too major. On Friday, this forex pair even hit its weekly high at around the 0.936 mark. It ended the week still pretty strong at 0.934 and traders are now predicting for it to continue following this bullish trend once markets reopen early on Monday.

AUDCAD is rebounding clearly from the retest area in the daily timeframe chart. 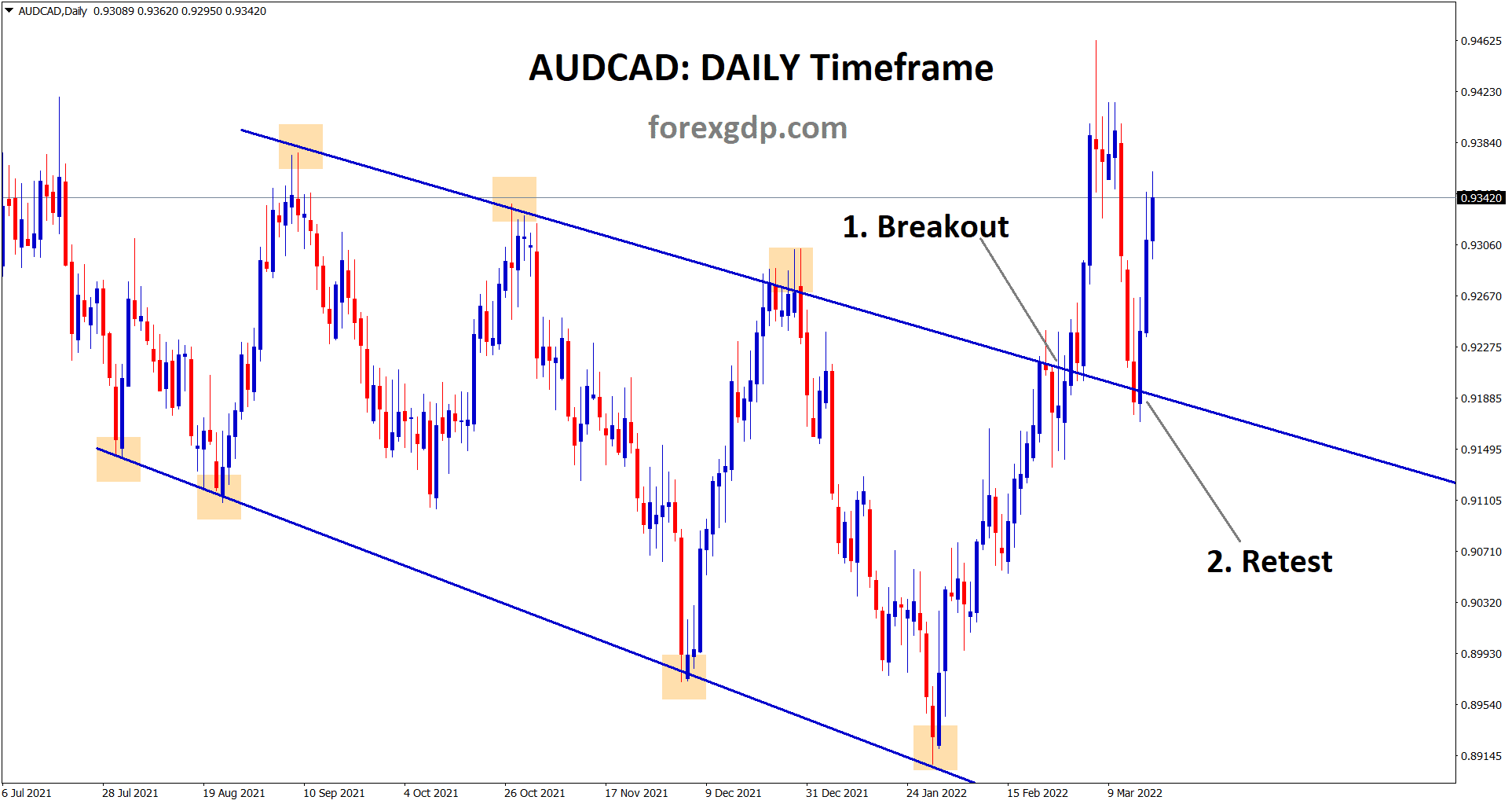 AUDCAD is moving in a strong uptrend in the 4-hour timeframe.

One of the biggest reasons for this otherwise stable currency pair to make a comeback and enter bullish market conditions is definitely the fact that the Australian employment data report came out to be much better than expected. The country managed to add 121.9K full-time jobs, and while the number of part-time positions was down by 44.5K, the final total was 77.4K – more than doubling the 37K expected. The Unemployment Rate contracted to 4%, while the Participation Rate rose to 66.4%. CAD is struggling to keep up with the Australian dollar following the recent release in their core retail sales for the month. The core retail sales have been down for the third consecutive year and analysts believe it to be partly due to the motor vehicle industry struggling to receive sales.

There are a number of upcoming events to look out for in order to place your positions more wisely with these valuable dollar currency pairs. On Tuesday, the Reserve Bank of Australia will be releasing their Meeting Minutes. This Minutes Meeting will give more insight into what was their reasoning behind the current monetary policy changes made in the country. it will also give a detailed outlook on what they expect for the future of the economy of the country. On Tuesday, the U.S. Department of Labor will also be releasing its Production Price Index (PPI) which will give more insight into the change in the price of goods by manufacturers. This is a great indication of the level of inflation in the country. On Wednesday, we will be expecting the results of the U.S. Core Retail Sales for the month. This is a great measure of consumer spending in the economy. Canada will also be releasing their Core Consumer Price Index (CPI) the same day. This will measure the change in prices from the consumer’s perspective which is a great measure of the current inflation in the country.