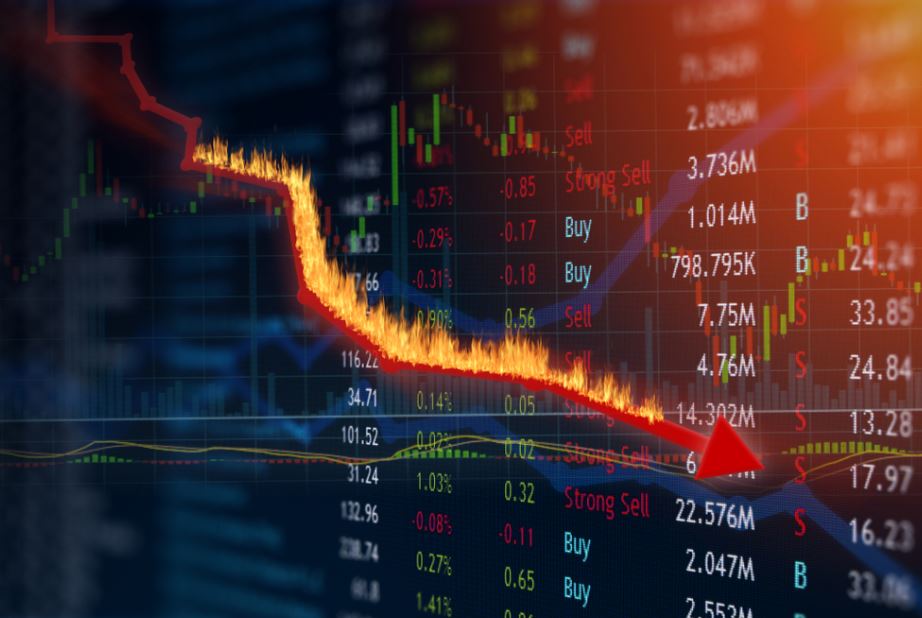 GOLD- After FOMC, gold is shrinking.

Gold reached the minor support level, wait for the correction from this zone.

Gold prices shrugged off 6% last week after the FED meeting decided to Hawkish rates in 2023 as Two times and 2022 ending tapering purchases will start.

St. Louis FED President James Bullard said inflation is running at 3% this year and 2.5% in 2022, but inflation numbers seem larger, and the Fed will control this inflation target to 2% after rate hikes in 2023.

So, not to fear the inflation numbers in the near term.US, Core PCE inflation hits 3.4% in May month which is higher since 1991

USDJPY still moving in an uptrend for a long time. 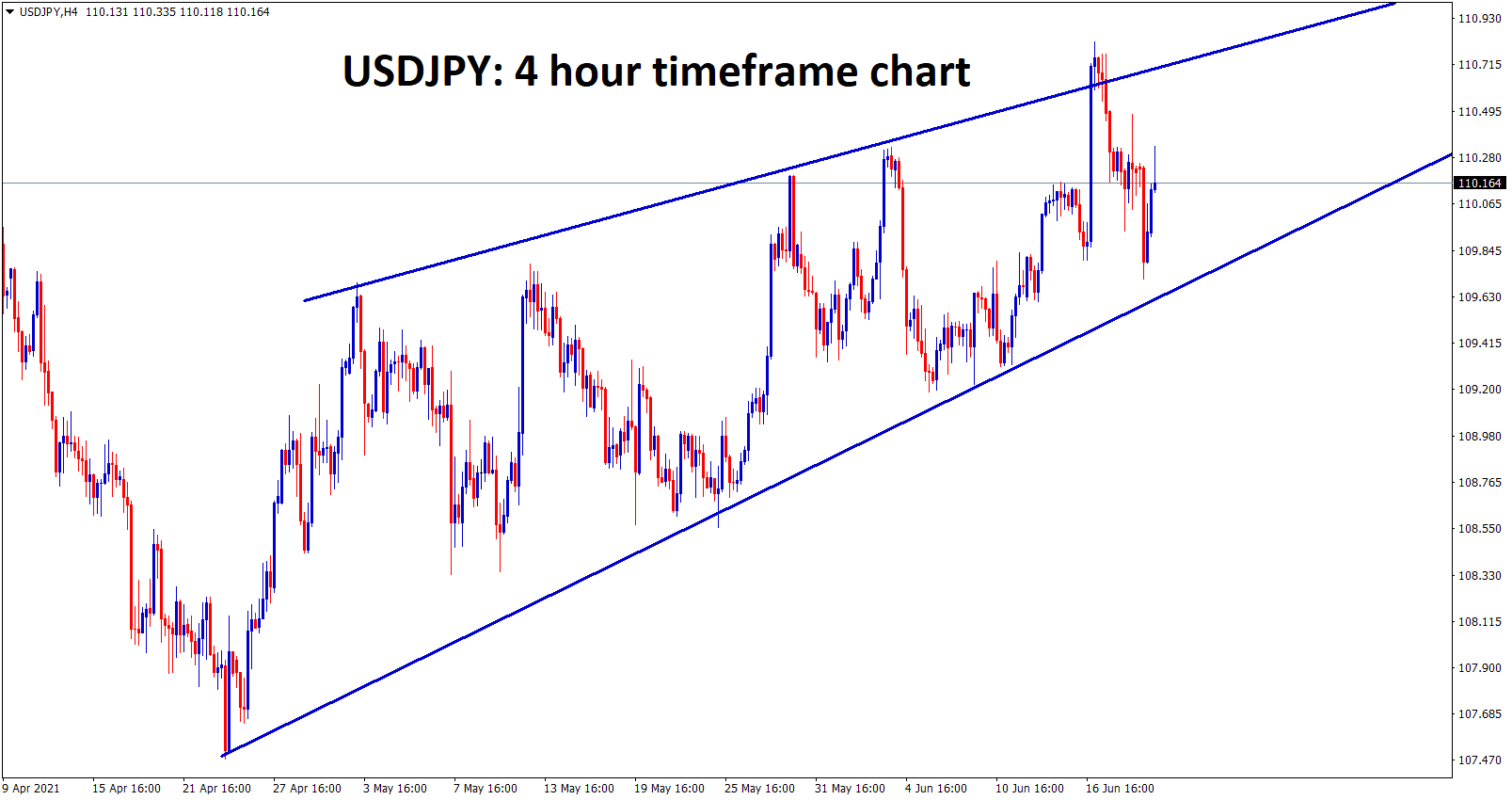 US Dollar made higher after Steep voice in Hawkish tone of Interest rates in 2023 by FED decision last week.

And this week, Core PCE inflation expected to lower after a sharp rise of 3.4% in May Month.

Domestic data may support US Dollar in further weeks, but this week we may expect some correction as last week 2% jumped from 90.500-92.

FED Powell and Company outlook on inflation remain higher until 2022 end then it will be controlled gradually.

EURCHF moving in an uptrend for a long time, Now market-moving inbetween the minor descending channel. wait for the breakout at the top to Buy EURCHF for long term.

And there is no inflation too much rising in Eurozone as Covid-19 Spread were controlled and, in Many regions, released Lockdowns and 60% of the Population gets Vaccinated.

EURUSD pair may go for some correction phase for another 6 months as the long rally from 1.5 years from April 2020.

GBP – Expecting to tapper its assets

This week Thursday Bank of England meeting will happen, and more expectations were in Tapering assets and Hike rates sooner in Central banks.

As Last Week FED said, the Hawkish tone will be sooner than later, so the same Voice is expecting in Another major central bank – the Bank of England.

Inflation expected reading was in 2.1% in May year on year versus 1.5% in April month.

Even though the Inflation reading target of 2% got achieved in one month but not still sustainable.

UK Pound last week Shrugged off 4% in a single week; this week, we may expect 2% upside recovery as correction phase.

CAD at its monthly resistance level 91.

USDCAD went into a big ride after breaking the Ascending Triangle at the major support area.

US Dollar made higher after FOMC meeting supports US Dollar to higher.

And the US Oil prices continue to move higher, but the Candian Dollar is a currency not to move like commodity prices, Bank of Canada may taper asset purchases in 2022, beginning as second time is expected by investors view.

Still, USDCAD Pair may jump to 4% up in the following weeks, and this week may expect some correction.

As Covid-19 level slightly came under control in Canada and Vaccinations are slower in progress. Domestic data for Canada performed well and helped Currency to stronger.

JPY – Rising but not against USD

A sharp bounce back after retesting the previously broken resistance in CHFJPY.

Japanese Yen came to stronger after purchase of ETFs made higher by Bank of Japan.

But USDJPY only makes higher against the Japanese Yen, and other pairs fell about 2-3% significantly after base currency declines. GBPJPY, CADJPY, AUDJPY, NZDJPY, EURJPY, CHFJPY all pairs decline 2% in last week except USDJPY Up by 2%.

AUD – In long Downfall after FOMC 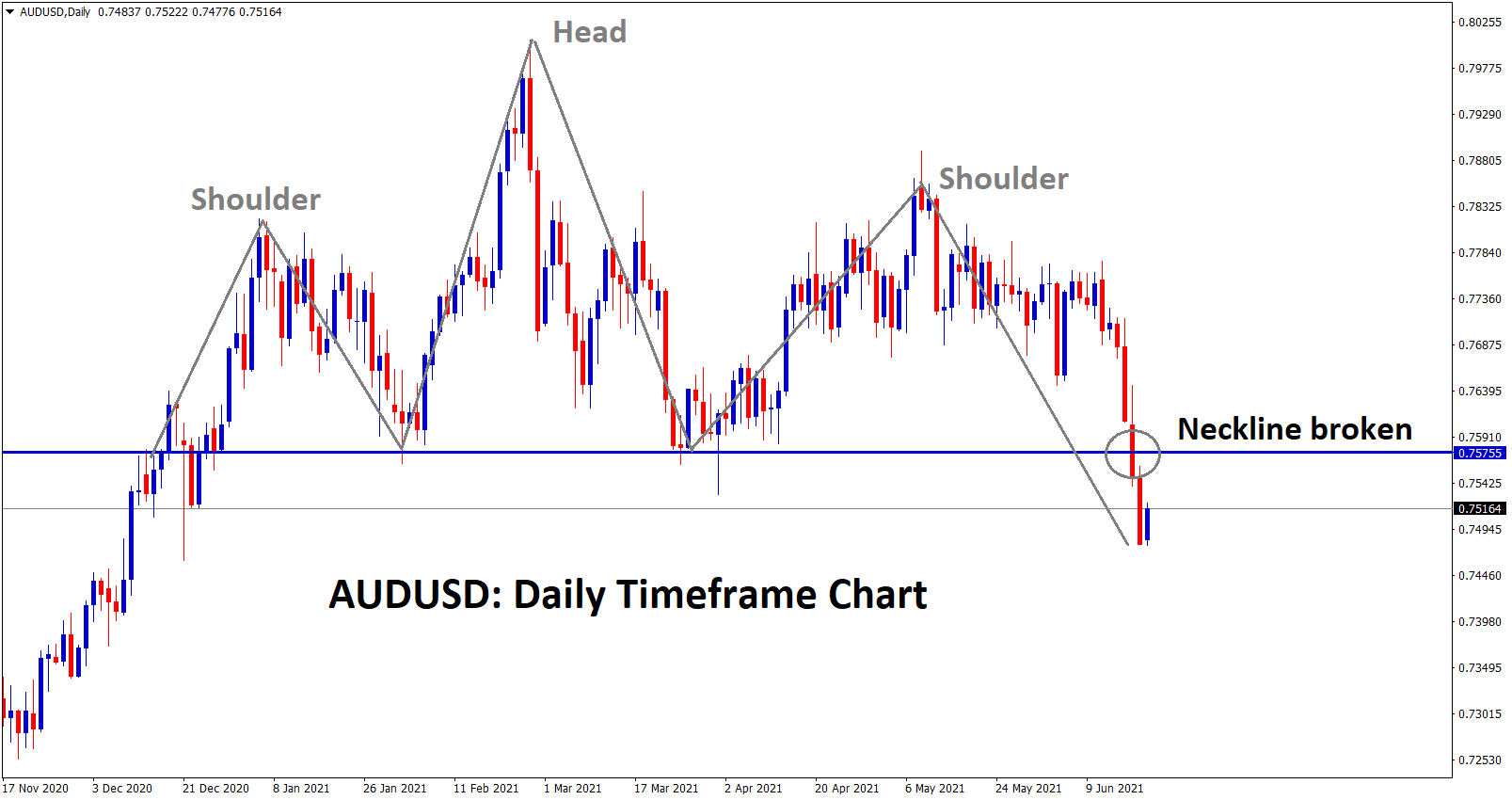 Retail sales data of Australia Crossed above numbers may stop the Bleeding of Australian Dollar Downfall.

Now, this week may expect some correction to 0.76-0.76500 level as Domestic data supports.

Australian Foreign minister Marise Payne said that China and Australia would go for Bilateral discussions on Wine Tariffs over 200% imposed by China on Australian Wines.

And Australia said legal statement for negotiations told over to WTO about China tariffs on Australian Wines. If it goes higher year by year, Then Businesses of exports to China will harm Australia.

Due to this, China must reconsider the tariffs on Australian Wines imposed and does tariff-free business to implement between China and Australia.

NZDUSD trying to retrace from the recent support zone. 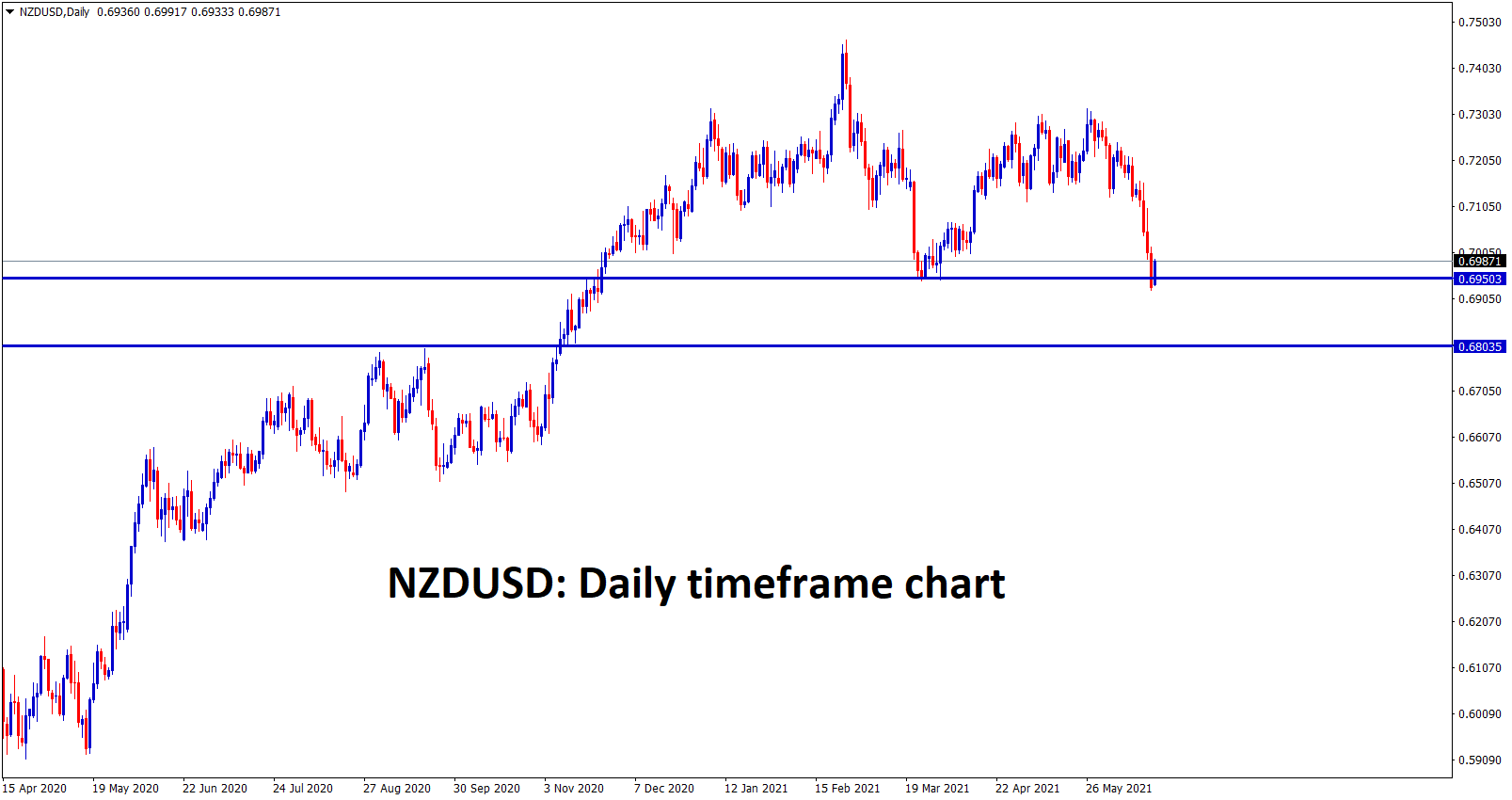 And now New Zealand also joins with US, UK and Canada Voice over against China activities on South China sea.

Due to this, Business relationships with China now are putting some pressure on exports. And China may impose tariffs on New Zealand Products soon like Australian Products.

And Domestic data of New Zealand performed well, and Lockdown restrictions were eased after Covid-19 gets arrested.

Tourism lacks revenues in the Covid-19 Crisis period and may soon recover in the 2022-2023 period.

CHF – SNB hopes on the recovery of the economy

USDCHF bounces back to the previous support which act as new resistance now and also market reached 61.8% retracement.. 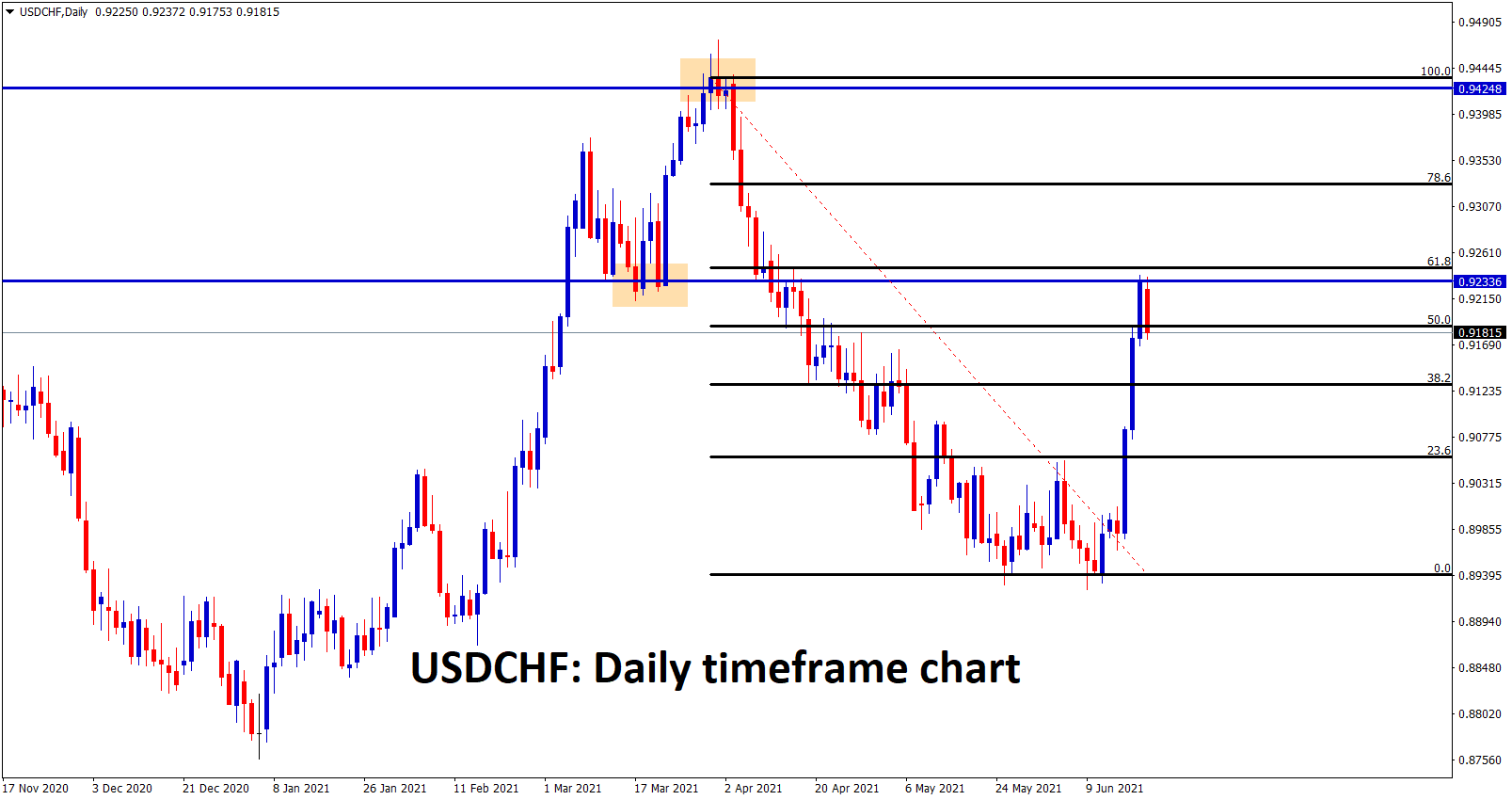 Domestic retail sales data may come in good numbers in May month, and Covid-19 Vaccinations are better now.

Swiss national bank hopes the Economy will recover up soon if Covid-19 Vaccination gets faster.

USDCHF up by 1.5% after the FOMC meeting last week, and USDCHF Further directed to 0.94-0.95 level if Swiss Franc Continues to decline.